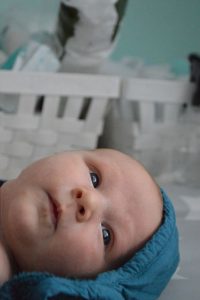 The power of story-telling is second to none when it comes to birth.  For many women there is a desire to share their stories with the world, to inspire women to have a similar birth, or more often to prevent them from experiencing the same.  At the end of January a new mum reached out to us on our Instagram page.  She wanted to share her pregnancy and birth journey.  We were so touched by what she wrote that we got in touch to ask more.  Here is Hannah’s story …

“Multiple pregnancy loss and the resulting grief I experienced led to an inability to continue to try to show the world that I was OK.  At the end of 2015 after my miscarriage I began to experience different flashbacks from my past and episodes where I didn’t feel in control of my body.  I was suffering from PTSD, including something I later found out is called ‘post-abortion trauma’, from my teenage years.  It can be triggered decades later by pregnancy loss, or even pregnancy itself.  Within the pregnancy/parenting community it feels okay to talk about miscarriage, but not about abortion, even though I imagine many women have experienced it. I had so much shame and guilt around my abortion and felt so alone but it seems to be the ultimate taboo and must never be spoken about. Perhaps because of this, my miscarriage triggered this ‘post-abortion trauma’.  I was told that I had to be admitted to hospital with my miscarriage but being in a hospital room, using bedpans and the pain and blood loss made me relive my abortion. I don’t believe this needed to happen, I would have preferred to have been at home.  As I started to learn that it was okay not to be okay (which I found so hard!) I could no longer contain and ignore the memories of childhood and adolescent sexual violence that I had held down and had blamed myself for for so long. I started to see an amazing counsellor who is very experienced in working with women who have survived sexual abuse and are experiencing trauma. I angered my GP by refusing antidepressants (as I wanted to conceive again) and was told that it was selfish to continue to try for a baby with the state of my mental health. This felt unfair.

It was after I transferred hospitals at 24 weeks (because I needed to be under a certain hospital for home birth) that I took on my doula.  I wanted a doula from the beginning but I thought I wouldn’t be able to afford it – I spent so many nights trying to work out the maths in my head.  My husband and I had a conversation where I said I know this is money we cannot afford but I also feel like we can’t afford not to have it.  I looked at the mentored doula profiles and Lauren had had had two homebirths herself and came across as a really gentle person.  We both met with her and I just knew she was the right person, she felt safe.  I think a doula is there to support whatever your birth choices are, but the fact she had had two homebirths for me was really powerful.

At 37 weeks after growth scans which were all spot-on, and never having had any of the conditions associated with raised BMI; the female consultant, with a high level of resignation, left me to my ‘fate’.  She said “You know the risks, I’ve read through your notes, we’ve repeated the risks to you” which obviously I was well aware of. The midwives were willing and I felt like I had a really supportive community team.  The two midwives I had overnight when I was labouring I had never met before.  One of them I really liked, and then a second one came but it took me a while to check her out.  My friend in the US had recommended the book Birthing From Within and I had read the chapter on being a wolf mother and how you need to ‘sniff’ people out as it were and check if they feel safe enough to be let into your ‘territory’.  I really felt like the first midwife made me feel safe.  I could see her reading my birth wish list carefully.  So after the second arrived I needed to retreat to my bedroom to get back into my safe head space and slowly I let her into my ‘territory’. However, when morning came, there was the shift changeover and I felt really upset.  I was upset it was daylight and that I was going to lose these two midwives who I had grown to trust in my space.  The new midwife arrived and I had met her before, but hadn’t liked her.  So I retreated again with Lauren, my doula, to my bedroom.  Again, I had to re-find my safe space in my head.  Lauren was so central to that because I knew and liked her and if she hadn’t been there I believe my labour might have failed to progress and that I might have had to transfer to hospital.  The midwife was great when it came to pushing and that’s when I felt safer with her. 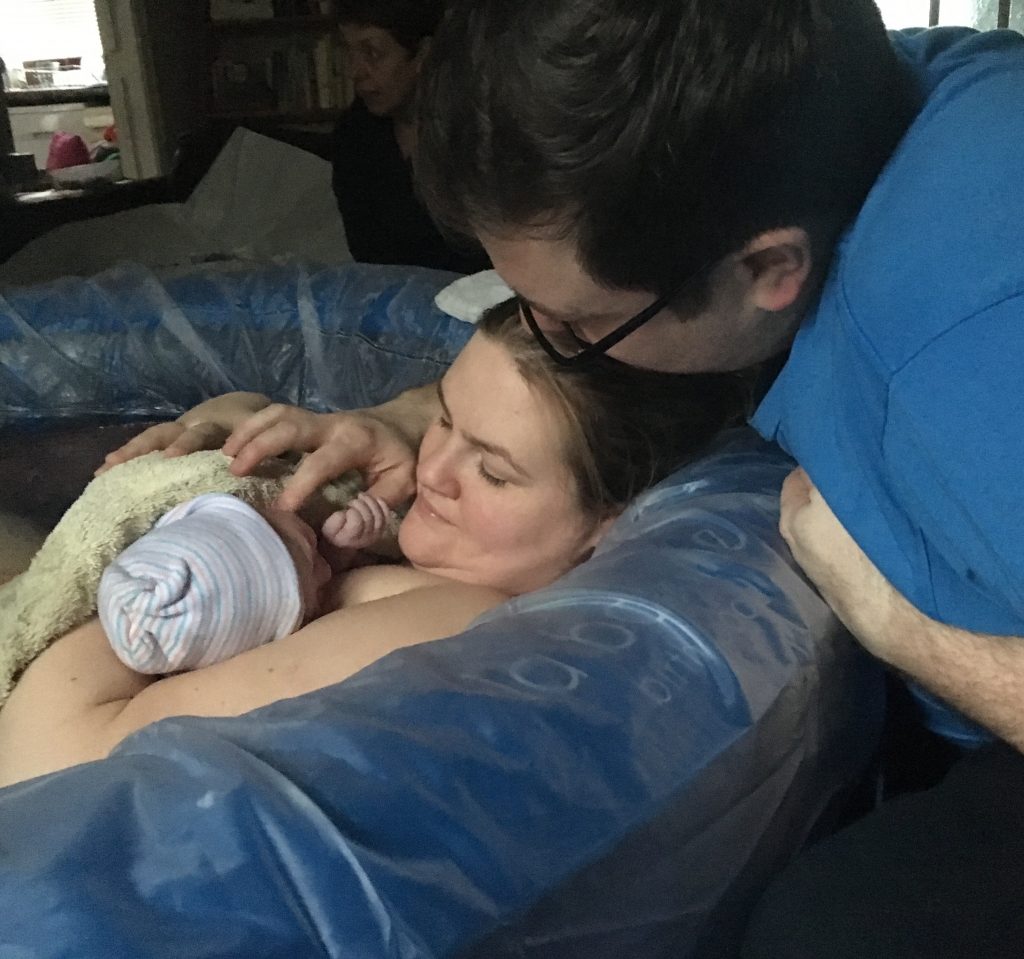 Just after birth – in the pool at home

Afterwards when I was lying on the sofa and found out I needed to be stitched up and had to transfer to hospital in an ambulance I became hysterical.  It was the only time I had gas and air and it made me very emotional and I said “It’s my BMI, that’s why I’ve torn, I knew it would come into it in the end”.  The midwife, in a very strong Mancunian accent said “It’s got nothing to do with your BMI” and that’s when she came in to her own and I believed her.  I had this feeling that everything was right, in its rightful place.  Me being in my own home and having Lauren as my really safe person was integral to it going as well as it did.  Ironically when I went in to hospital I couldn’t believe they took me to my own room on the Labour Ward I had tried so hard to avoid and the doctor who saw me was the last consultant I had seen who resigned herself to the fact that she couldn’t do anything about me wanting a homebirth.  I had this moment when I felt like “Look, I did it.  I had my homebirth and I did that successfully, and had my golden hour of skin to skin in the pool before I knew I needed to go to hospital, and I delivered the placenta naturally and all these things I wanted.”  But there was also this spiritual moment of humility and recognition for me where I said to myself “Yes, I’m so grateful that you do what you do and that you have your training because this is my medical moment and this is when I need YOU.”  I feel really emotional talking about it because I didn’t need the doctors for the birth, I didn’t need the doubts and the feelings of power that I think doctors can have over people but I needed them afterwards … so it felt like it was good for both of us in that context.  I think Doctors can feel threatened when you want to go against what they know and see and experience and I felt that was perhaps why they fought me. So, it felt like moment of victory for me but also a grateful moment of humility to say “Yeah, I’m grateful the NHS exists and these services exist so that you can repair my body”. 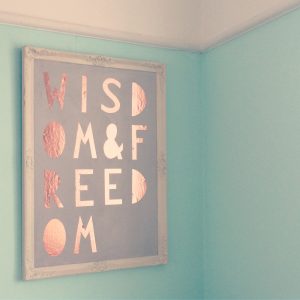 I gave birth to our beautiful daughter in a birthing pool in our living room with the support of my husband, my doula and the midwives. It was the most empowering experience of my life to have conceived, grown and birthed my girl (and myself as a Mama) in the way that I knew I needed to, for her and for me.  I can’t explain how in love I felt with my daughter, but also how in love I felt with my body and myself in that moment.  I know you’ve got crazy endorphins and stuff, but that feeling hasn’t gone away.  Birth is incredibly empowering if it is a positive experience but I think regardless of the birth that this is going to take me forward, along with my hard work in therapy to help me feel like my body is mine again. I never thought that pregnancy, labour and birth would be part of the healing process but they have helped me come home to myself and my body.  It just feels like a miracle compared to what I was told labour with my body was going to be like. I feel so blessed because this isn’t something I have to add to the list of traumas in my life that needs to be worked through.  I am so grateful not to feel traumatised by my birth. We named our daughter Sophia (meaning ‘wisdom’) and Saoirse (which is Gaelic for ‘freedom’). Two powerful words which truly summarise this journey.”

If you have been affected by this story then please don’t hesitate to contact us – info@nurturingbirth.co.uk

For support after miscarriage The Miscarriage Association has a helpline, operated from 9am to 4pm Monday to Friday – 01924 200799

[…] another blog which looks at a positive relationship between midwives and doulas visit http://nurturingbirthdirectory.com/wisdom-freedom-birth-story/ Contact us at Nurturing Birth if you would like to talk […]

Change Location
To find awesome listings near you!